THE WORK OF FABIO GIAMPIETRO IN A DIALOGUE BETWEEN PAST AND FUTURE, PAINTED CANVASES AND THEIR VIRTUAL EXPLOSION

Hyperplanes of Simultaneity – inspired by the block universe theory – is a project by Fabio Giampietro realized with digital artist Alessio De Vecchi.

In Fabio Giampietro’s work the barriers of art come tumbling down and a relation of continuity and simultaneity between the three spatial dimensions and time becomes tangible, though still imponderable, at the viewer’s eyes. His work marks the liberation of painted forms from the classical framework, enhancing a process, already well established in the course of Italian modern and contemporary art, that started with the revolutionary theories of Futurism at the beginning of the XIX Century and continued in the velocity of Lucio Fontana’s gesture of cutting the canvas to explore the space behind and beyond it.

His work melts the tradition of painting to the most innovative technologies conjugating the planes of space and time and annihilating the contemplative distance between the senses of the spectator and the reality of the art work. The virtual dilatation of the painting invites the spectator to experience its reality within its newly exploded boundaries, calling on all the possible resources of psycho-sensorial experience.

Giampietro’s main achievement lies in the fact that he shows that the painted work on canvas has no longer a central core, though it exists and faces us, but presents a dissemination of observing points linked to the spectator’s physical movements inside the virtual coordinates of the space arranged for us by the creative mind of the artist. For this reason in Giampietro’s work every step inside the work marks also our voyage inside the nightmares and the dreams of the artist’s mind, more vividly and presently than ever.

Fabio Giampietro was born in 1974 in Milan, Italy where he still lives and works. Through his unique technique (he paints subtracting the color from the canvas) he expresses a powerful and intense figurative painting. He had several exihibits in Venice, Milan, Bologna, Padua, Berlin, Paris, Istanbul, Zurich, Toronto and Shanghai. At the moment is one of the most sought-after young Italian painters.

Alessio De Vecchi was born in 1980 in Milan. He has been working for over ten years as an art director and cg artist in New York and Tokyo with clients like Samsung, Citibank, La Prairie, H&M, Margiela, Deloitte, HBO, Green Cross, Cappellini. In addition, his creations have earned positive attention from Vogue, I.D.Magazine, The Creators Project,  Monitor, Icon, Frame. His work as a visual artist has been screened at Pause Fest 2015 in Melbourne.

Hyperplanes of Simultaneity – or Constant Presence of Everything and Nothing

Absence of bodies – no, they are not absent, they’re right there on the surfaces of those buildings right there – can you see them?

Hyperplane is a model of a space with more dimensions than it itself has. In this exhibition Giampietro presents hyperplanes as representations of contemporary man’s general condition, in which all the imaginable is simultaneously present – and thus nowhere to be seen. “Absent almost always,” paraphrases actress Elaine Stritch Samuel Beckett in Elaine Stricth At Liberty (The Public Theater, New York 2001, dir. George C. Wolfe). “It almost all happened without me, but I caught up and I’m up here and I’m out here – alone… So what’s this all been about then? This existential problem in tights?“ It’s about the tights being too tight. It’s about revealing concepts beyond the material that surrounds us and has become our skin: the clothes, the buildings, the civilization itself. It’s about the planes that reveal our skin, about being there and being out of it, about belonging to, and about separating from economic institutions that do not let us out though we want to. Imagining and re-evaluating our situation, like Giampietro does, is a craft interested in understanding our condition – téchne [τέχνη] in its truest sense.

We keep swinging out of our bodies, attached to the epic World Tree [Yggdrasill]. Civilizations change quickly – all it takes is a decade or two – but: “The human substance and structure hardly change: nothing is more stable than the curve of a heel, the position of a tendon, or the form of a toe. But there are periods when the shoe is less deforming than in others. In the century of which I speak we are still very close to the undisguised freedom of the bare foot,” writes Marquerite Yourcenar in Reflections on the Composition of Memoirs of Hadrian (Farrar, Straus & Giroux, New York 1981, trans. Grace Frick). “…those men who, like us, nibbled olives and drank wine, or gummed their fingers with honey, who fought bitter winds and blinding rain, or in summer sought the plane tree’s shade; who took their pleasures, thought their own thoughts, grew old, and died.” 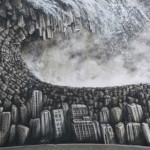 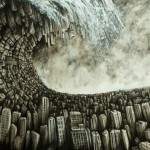